Most of the singers who saw Park Jang-hyun’s stage in ‘National Singer’ were greatly comforted by crying or crying.

Photo = TV Cho
In the TV Chosun entertainment program ‘National Singer’, which was broadcast on the afternoon of the 11th, the second round of 1:1 death match was drawn.

On this day’s broadcast, most singers including Baek Ji-young shed tears on the stage of Park Jang-hyun, who came up before the second round of the finals.

Park Jang-hyeon selected Lee Hi’s ‘Sigh’ and made the masters cry with a look as if he was pouring out his own story.

Even before the song ended, Baek Ji-young continued to cry, and even after the song ended, she couldn’t stop crying. Junsu Kim quietly wiped away his tears, and Shinji also showed tears.

Regarding Jo Yeon-ho, who had a confrontation with Park Jang-hyun, Kim Bum-soo said, “It showed that softness is not weak. I am a high-pitched singer, but Jo Yeon-ho is soft enough to make a strong impression.”
View original image 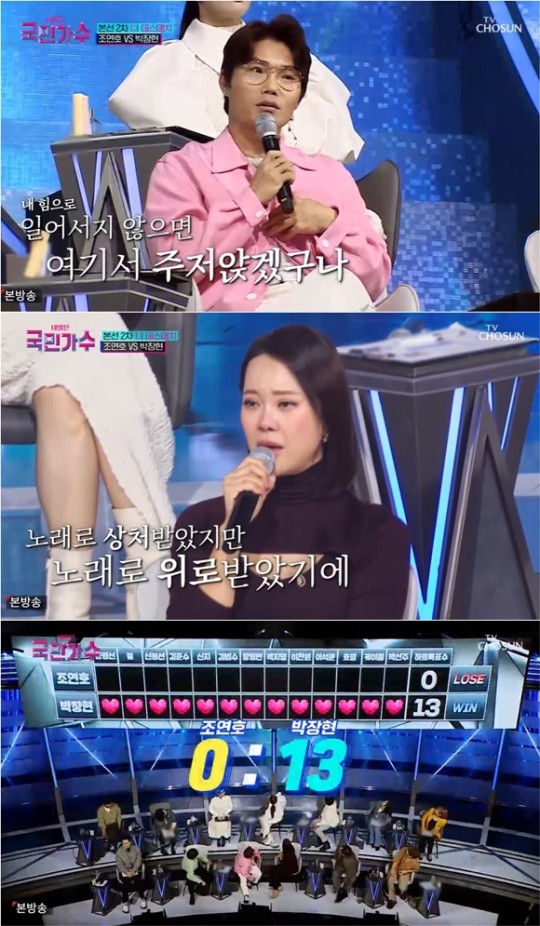 /Photo = TV Chosun ‘National Singer’ broadcast screenBaek Ji-young, who stopped crying and took up the microphone, said, “Sometimes the emotions that singers feel when they sing on stage are comforting to me. More,” he said crying.

He continued, “It’s a song that hurt Jang-hyeon, but it’s also a song that comforted me, so I think it’s a blessing for Jang-hyeon.

Kim Bum-soo also comforted him with his own experiences, saying, “As a singer, you must have experienced stage fright at least once.

As a result of the match, Jang-hyeon Park defeated Yeon-ho Jo with a 13-0 All-Heart and won the final 2nd place in the second death match of the finals.